Mysterious and beautiful monuments from 1,150 years ago

‘AWESOME’ will be the word that immediately springs to mind as you begin to explore the Prambanan Hindu temple complex near Yogyakarta.

You will be asking yourself just who were these people who built and caved these ornate and beautiful structures back in the 9th century?

You will marvel at the imposing scale, the majesty and the mystery of these relics of that earlier age and wonder how local people built it way before the mechanization and engineering systems of our modern era – back in the days when Charlemagne, king of the Franks, had barely created the beginnings of Europe and Viking raiding parties were sweeping the British Isles?

Back more than 300 years before masons laid the first stonework for the famous Gothic Notra Dame cathedral in Paris.

And how did these magnificent monuments come to be built here near the southern coast of an isolated volcanic island so far from the rest of the world?

But what you see at Prambanan today is a shadow of what once was. In this location around 1100 years ago more than 240 ornate temples of intricate stonework and varying scale extended over a swathe of 77 hectares.

Time, political and social change and the impact of earthquakes – particularly major quakes in the 11th and 16th centuries – reduced much of the huge complex to ruins.

Two videos to introduce you to the magnificence of Prambanan. The first video (3:56 mins) is from the “AMAZING PLACES ON OUR PLANET” series by Milosh Kitchovitch (see more of his work at www.youtube.com/user/milosh9k/). The second video by Thierry Yuri (2:58 mins) provides an aerial overview.

Forgotten and shrouded by layers of Jungle

Like the famous Borobudur Buddhist temple, Yogyakarta’s other world-renowned religious monument, Prambanan was covered by jungle and largely forgotten for more than 400 years.

In 1811 a surveyor working for the then British Governor General of Java, Thomas Stamford Raffles, “rediscovered” the ruins of the remaining temples.

But the British administration lasted a brief four years with Raffles departing and Java reverting to Dutch control as part of the settlement ending the Napoleonic Wars.

Extensive looting and vandalism followed with resident colonials adorning their gardens with priceless statues and local people helping themselves to foundation stones for their homes and community buildings. Proper restoration began only from around the 1920s. Over the years enthusiasts and students scoured the kampungs and townships around the region, persuading people to give back pieces originally looted from the complex by their forebears.

Maintenance continues today with strong support from the Indonesian Government and recognition since 1991 as a UNESCO World Heritage Site.

So far 16 of the original temples have been restored, despite a setback of more earthquake damage in 2006. But a policy that 75% of a structure is needed before it can be undertaken means any further restoration is unlikely.

Prambanan is Indonesia’s largest Hindu shrine and is rated by many as among the world’s most beautiful.

Soaring sculpted towers, exquisite carvings, statues and intricate reliefs celebrate the stories of the Gods and illustrate the epic of the Ramayana.

The Hindu Sanjaya dynasty of the ancient Mataram Empire is credited with building the complex from around 850AD, soon after the completion of the Borobudur temples by the Buddhist Sailendra dynasty.

The main temples are dedicated to the Hindu Trinity of Gods – Brahma (the Creator), Vishnu (the Preserver) and Shiva (the Transformer).

The complex abounds with symbolism, myths, legends and mystique and our guides will introduce you to some of these as we explore.

But what’s most amazing is that two of South-east Asia’s greatest historical and archaeological sites are so closely linked by time and distance.

Together they are testament to the richness and the might of their era and the cultures  and civilizations that produced them.

A testament to centuries of religious coexistence

Buddhist Borobudur is less than 50 kilometres away and just 800 metres to the north, within walking distance of the main Prambanan complex, is the calm and equally ancient Sewu temple complex.

Along with the Lumbung, Bubrah and Asu temples in the northern part of the Prambanana compound, Sewu honors the Buddhist religion – in fact Sewu is the second largest Buddhist complex in Indonesia after Borobudur and its construction is thought to have preceded Borodudur.

The proximities suggest that peoples from two competing and different religious world views co-existed in relative peace for some 400 years – a story worth telling and a parable our modern societies of today might well draw upon.

Visitors to Prambanan are expected to dress modestly and we recommend appropriate shoes and a hat. Consider sun screen and carry a bottle of water.

The temple staircases are steep, uneven and without handrails, so take care. Don’t panic if you do not wish to climb – the complex can be viewed and enjoyed from ground level.

We explore the main areas of the complex until it closes at 5pm (be prepared to run the gauntlet of hawkers and stallholders as we exit).

Weather permitting, we then travel about 15 minutes to a hilltop next to the nearby Kraton Ratu Boko temple to view the spectacular sunset over Prambanan (cameras at the ready for marvelous memories).

Spectacular and famous ballet presentation from the Ramayana story

As dusk settles, we travel to the beautiful Ramayana Restaurant right next door to the Prambanan complex for a special highlight of our Yogyakarta visit.

First drinks and a selection of Javanese foods in a stunning garden setting with the grandeur of the Prambanan temples bathed in soft floodlights as backdrop.

Then from 7.30pm the brilliantly colorful Ramayana Ballet with a cast of 200, accompanied by a traditional Gamelan orchestra. This spectacular two-hour show will be an enduring memory of your Indonesian visit.

The ballet was first performed on the full moon night of August 25 in 1961 with Indonesia’s founding President Sukarno in the audience and has continued with countless performances ever since. In 2012 the Guinness Book of Records named it has the world’s longest continuously running stage production.

For the wet season months from January through April it is staged in a special indoor setting. From May through December it is presented on a massive outdoor stage with the Prambanan Temples as the backdrop. It is quite extraordinary!

The ballet relates the Javanese version of the ancient Ramayana folk legend. While you will not understand the language, it doesn’t detract from the performance and outlines of the story in English are available so that you can follow what’s happening.

A bonus video for you

This longer video (9:34 mins) by www.worldsiteguides.com provides a comprehensive look at Prambanan and may highlight more aspects that will enhance your visit – if we know more in advance about what we are seeing we miss less and learn and appreciate more!

Prambanan and the Ramayana Ballet are just part of a long list of things to see and experience in and around Yogyakarta – there’s just so much more. That’s why we spend three nights here. For more descriptions and images click the links below.

More to explore on the island of Java BOROBUDUR - so much more than the world's biggest Buddhist temple

Borobudur is more than just the world’s biggest Buddhist temple – it’s a special, iconic place with a fascinating story and an aura to match. It is Indonesia’s most visited attraction and after you have been there you will understand why … YOGYAKARTA - special places to see in a very special city

Yogyakarta exudes energy from a rich tradition of more than 1300 years of culture, history, empires, dynasties, conflicts, rebellions and spectacular achievements.Many consider it the intellectual, artistic and cultural capital of Indonesia … 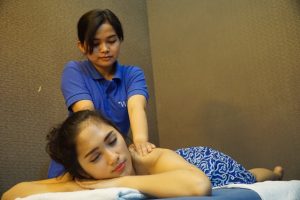 Making the most of your touring free time in Yogyakarta

Yogyakarta is a just the place to spoil yourself. This city has a reputation for quality service and low prices at its many spa and massage treatment salons – perfect if you want to ease any aches, pains – and it has Indonesia’s most fun shopping street … 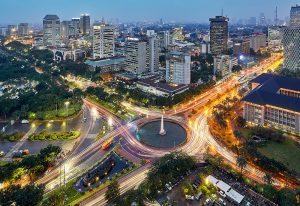 Jakarta - the Capital that expats have labelled as "The Big Durian" Mount Bromo - a surreal world of volcanoes and mythology

The mighty smoldering peaks belching smoke and surrounded by swirling mists illustrate thousands of brochures, articles and book covers. But no iconic photograph or words can substitute for seeing and experiencing the real thing close-up … To the Indonesian people Surabaya is Kota Palahwan – ‘The City of Heroes’ – for the sacrifices of its citizens and their inspirational role in the national struggle for independence. Their stand put Indonesia in the vanguard of a decolonisation movement that changed the face of Asia … 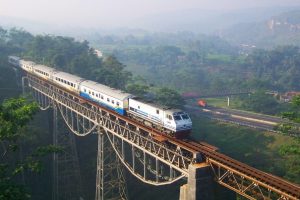 Taking a train - glorious Java countryside up close and in comfort ...

In our age of budget airlines and constant hurry few visitors know of Indonesia’s superbly scenic train journeys. We experience two of them – the Argo Wilis from Bandung to Yogyakarta and the Sancaka Pagi  from Yogyakarta to Mojokerto … MALANG - Charming and surprising jewel of the Eastern Highlands

Prized for its mild highland climate, leafy, historic Malang is consistently said to be Java’s most relaxed and charming city. It is famed already for it’s colonial buildings and broad avenues but it is now becoming widely noted for serendipitous surprises …